Conversation has a strange method of developing and diversifying content into an obsession. As always, this particular conversation took place in a pub, over a pint of cask beer, in the formerindustrial powerhouse town of Burnley, Lancashire. This outpouring and cascade of words was about beautiful buildings which Burnley has lost over the last fifty years. The usual suspects were verbosely paraded out: the former Baptist church on Manchester Road, the Thorn Hotel on St James’ Street, the Yorkshire Hotel on Yorkshire Street (aptly). My contribution was treated with the usual revulsion, contempt, even hatred, that I have become finely accustomed to: my former secondary school, Barden High.

For me, Barden High School represented 1960s Modernist architecture at its absolute zenith. A contemporary cathedral to learning, shimmering proudly in its coat of red brick and dominating the skyline around the vicinity in which I grew up. Sadly, like so many buildings of its epoch, the school stands no more! This piece is an affectionate tribute to a fine school, both the quality of the teaching and to the building itself, which only now exists in a handful of grainy photographs and in the nostalgic memories of former pupils, teachers and the local community.

In his recent television series entitled ‘Bunkers, Brutalism, Bloodymindedness’, the legendary architecture and art critic Jonathan Meades vented spleen at the way architectural legacies are treated in this country. Just as scores of beautiful, gothic, Victorian buildings were brought crumbling to their knees during the pre and post war cull of our architectural heritage, all in the name of progress (apparently), we are now experiencing the same bulldozing holocaust of exemplary Modernist and Brutalist buildings from the 1940 – 1960 periods. We, the British, for all our obsessions with questionable fascist organizations like English Heritage, have an appalling contempt for architecture which does not fit into our supposedly twee and narrow minded opinions of what good architecture should be conceived as! One outspoken critic of the government’s mass clearing initiatives of the late 1960s polemicised that British town planners and civil servants have inflicted more damage upon the architectural and social infrastructures of this country than Adolf Hitler and the Luftwaffe ever did. I concur wholeheartedly with that anonymous voice of dissent!

Nikolaus Pevsner, the German-born, British-based art and architecture critic, was the typical establishment, anti-modernist objector, although his contributions to the protection of Victorian architecture is certainly to be congratulated. Pevsner insisted that Brutalism had its roots deeply engrained in Expressionism, the brick based idiom which can be traced back to the Netherlands, Germany and the Baltic states during the 1920s and 1930s. One of the greatest exponents of Expressionist architecture was the Dutch designer Michel de Klerk, whose shimmering red brick social housing concepts must surely have been a major influence on the design of Barden High School. 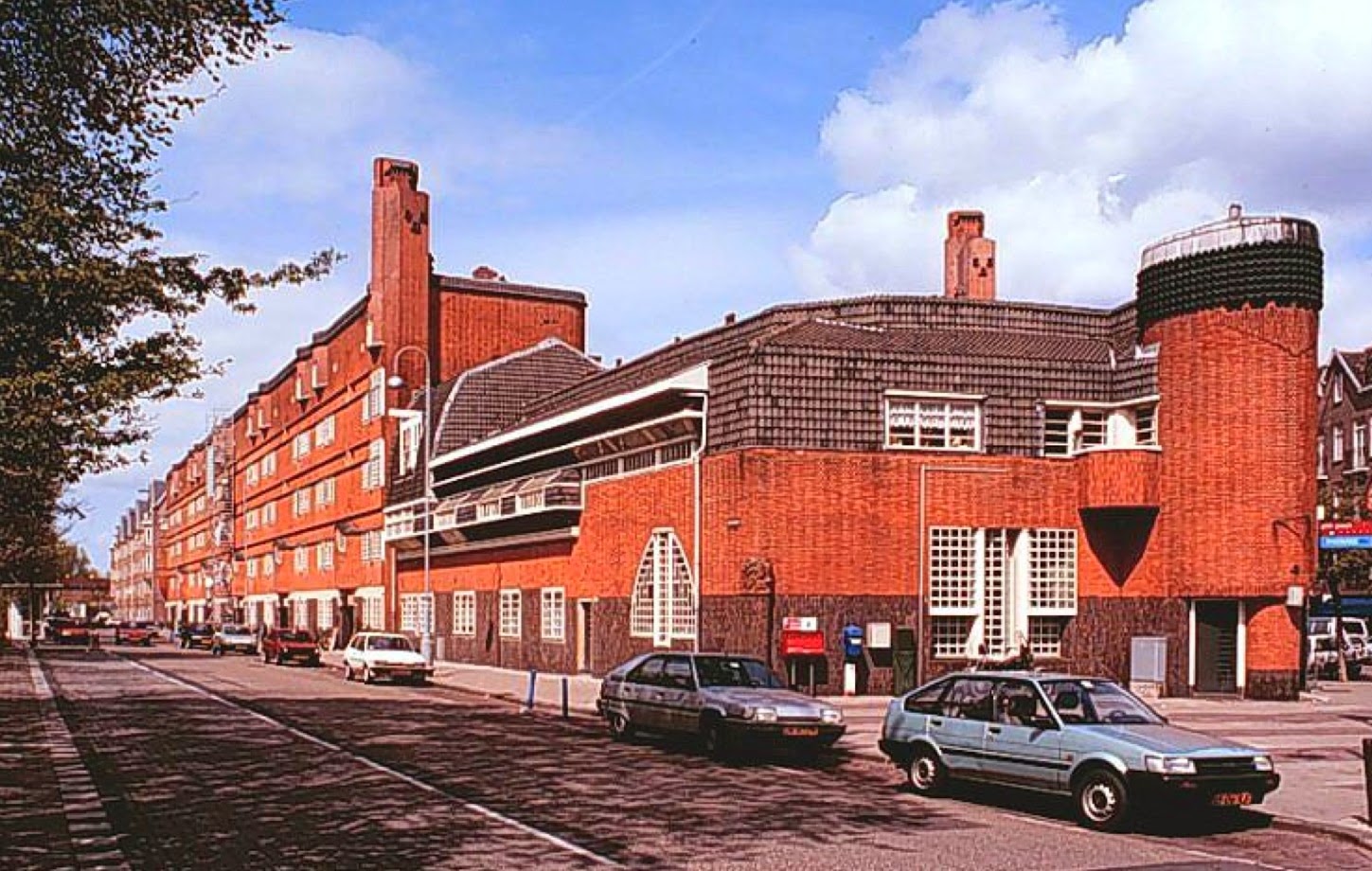 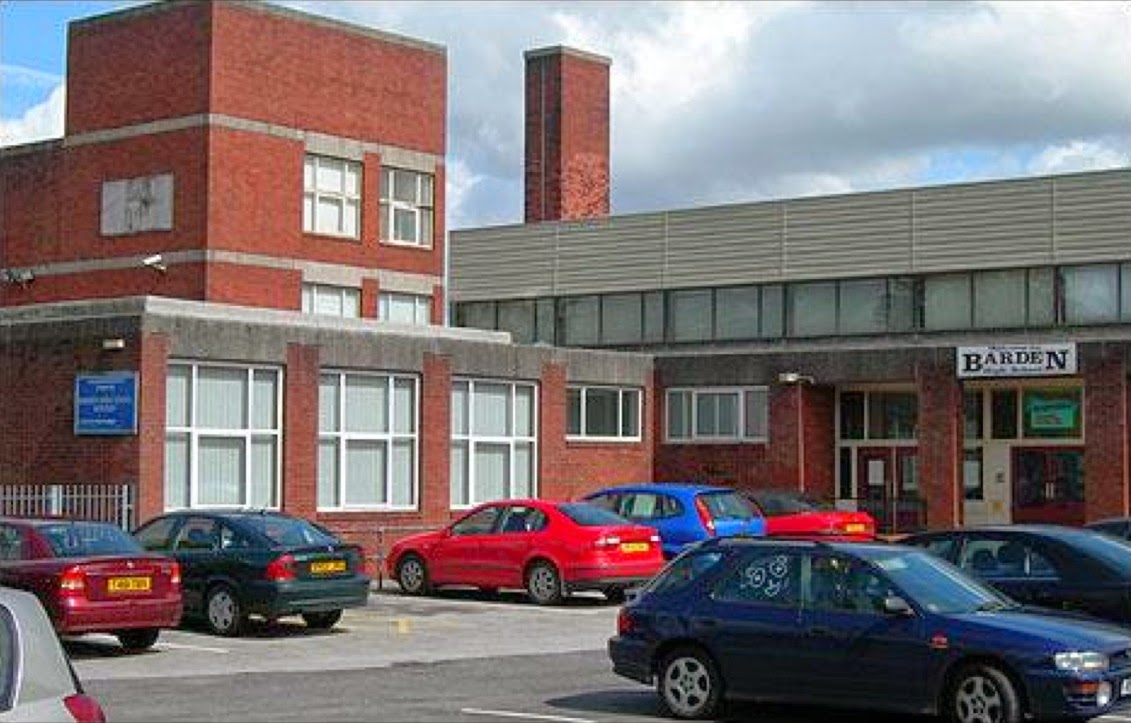 The New Barden High School was first conceived in March 1967 as a replacement for the old Barden Boys School, which had outgrown its usefulness and an amalgamation with the Burnley Wood Secondary School. The new school was built on the former Barden Recreation Ground and was officially opened by Lord Jackson of Burnley on 17 October 1968, bizarrely at 2:30 in the afternoon. This was a typically Barden-esque acknowledgment and obsession with belatedness. The new intake of pupils actually started their education on 16 September. One can only imagine how magnificent the new school must have looked in an era much vaunted for its explosion of Technicolor! The setting was the personification of perfection. Nestling in an area surrounded by both park and farmland and draped by the magnificent backdrop of Pendle Hill and the Ribble Valley, the setting formed a juxtaposition of red and green, primary colours which complement each other and sit together harmoniously throughout all weather conditions. My personal recollections are of the school in winter, when the dazzling red of the brickwork sat upon the white snow covered peaks of Pendle and the ‘Yves Klein’ blue of the sky. The large banks of windows allowed plenty of natural light to flood the classrooms, although the main corridor interconnecting the full length of the school was always notoriously dark from the school’s inception. This was not helped by the somewhat unnecessary needfor endless sets of double fire doors, which made negotiating the corridor awkward, especially at peak times. The stifling application of Health and Safety legislation was apparently alive and well and exhaling its foul breath as far back as the late 1960s! Still, the school had been designed to help complement the educational needs of the pupils, with each department’s classrooms branching off the main corridor as tributaries feed into a river. This replaced the Victorian concept that classrooms should circulate a central space, usually the school hall, where religious instruction took place, therefore instilling a ‘sacred heart’ to a building. Perhaps the architects of the New Barden wanted to reflect an emphasis on education and learning and less on theological instruction, although religious study has always played an important part in the school’s philosophy and ideology. The new school badge was designed by my former art teacher, Mr Peter Bielatowicz, a minimalist structure of green and red (those colours again) featuring three Lancashire roses, the Book of Knowledge, amanufacturing cog and two weaving loom shuttles, a semiotic exploration of learning, industry and hard work, the school’s ethos. Red and green were also implemented into the design of the school tie.

During my tenure at the school Barden had two main focuses: sport and the arts. Being a single sex school (most disappointingly for most of us) it is easy, with hindsight, to see how the extracurricular activities were moulded towards the passions of boys aged 11 – 16. I personally didn’t have much of an interest in partaking in sporting endeavour, although I was and will always be a vociferous supporter of Burnley Football Club. For sensitive souls like me, the arts and literature were the sole focus of my passions. The school boasted a fine library and the music and art departments were always bursting with cutting edge equipment and this was in the days before computer technology revolutionised the classroom. This leads us to beg an answer to the searching question:

‘why was Barden High School demolished?’

The official reply will be the need to restructure and modernise the secondary education system in East Lancashire, amalgamating the two remaining single sex schools in Burnley (Barden and Walshaw) and redeveloping the existing Barden site to incorporate the new Thomas Whitham Sixth Form Centre. Cynics will argue that Burnley Council desperately needed a way to spend the government cash which poured down upon Burnley after the social unrest of late 2001 and the modern obsession for building new American styled super schools, which has resulted in almost all of Burnley’s historic school buildings being demolished and rebuilt as these functional, spatial and ergonomic, yet soulless and somewhat lifeless structures, lacking any architectural integrity or artistic splendour. Sadly, I am unable to give prestige to the original architects who designed the New Barden High Secondary School as, according to the Lancashire County Council archives department, the original blueprints and planning applications have been lost. Likewise, we have no record of the original contractor who helped to construct this Modernist masterpiece and bring it to life. In a sardonic twist of irony, we have plenty of records relating to the companies who helped to raze it to the ground. Likewise, the original suppliers of the red bricks, the surveyors, the structural engineers: all names which appear to have been lost to posterity.

Perhaps, fifty years from now, we will feel overwhelmingly protective to these super schools which have been built over the last decade in a similar vein to how we Modernist enthusiasts feel about buildings constructed during those amazingly inventive thirty years which followed the end of World War II. This may be a somewhat quixotic belief to uphold. We are living in an epoch where architecture is suffering. Whilst we can feel privileged to engage with the work of great contemporary architects such as Zaha Hadid, Norman Foster, Frank Gehry, Daniel Libeskind and Rem Koolhaas,who’s magnificent and intelligent structures adorn some of the world’s greatest cityscapes, the architecture which is inflicted upon British towns and cities lacks inventiveness, imagination and beauty. An entire housing scheme in a North West town has recently been completed without any thought given to the placing of residents’ refuse and recycling bins! Total architectural ineptitude. If functionality and ergonomics are to be the most important element of modern day architecture, then this housing scheme has failed at the first hurdle! One may argue that I am against modernisation; I am not. I appreciate that modern architects need to be given new commissions, whether they be showpiece buildings in our major cities or new schools and housing estates in Burnley, but I do not want our interesting and diverse architectural heritage to have to make way for them. I believe Barden High School was beautiful, it was interesting, it complemented its landscape and surroundings harmoniously. But now it is gone and we need to make sure that other important, local buildings from the mid-twentieth century don’t fall under the bulldozer’s grip. Preston has only just managed to save its fantastic, Brutalist bus station. Time will tell if this historically important building will become one of the city centre’s focal points, or if this is just a stay of execution!

I will conclude this piece with the words of Jonathan Meades, the one man crusader for Expressionist, Modernist and Brutalist architecture:
It took more than three-quarters of a century before high Victorian architecture began to be rehabilitated through the efforts of John Betjeman, Evelyn Waugh, etc. Their pleas went unheeded. They were reckoned to be perverse and mischievous. Thousands of "monstrosities" were destroyed. The survivors are now widely valued and lost ones are mourned. We have learnednothing. Half a century after Brutalism's heyday, the term "concrete monstrosity" trips readily off the tongues of the unseeing, the torpid, the incurious. Britain is once again being architecturally cleansed in favour of timidity and insipidity.
Let us hope that the pioneers of this needless and senseless demolition begin to see sense.

Thank you for reading.

I would like to thank Andrea Dewhurst for her help, tolerance and perseverance editing this article and for taking my pataphysical musings and turning them into something cohesive and understandable.
Posted by 0282 at 09:51 10 comments: